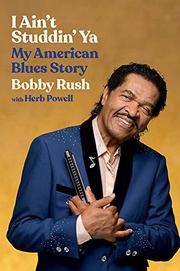 by Bobby Rush with Herb Powell

A richly detailed account of a bluesman’s full life.

Although Rush (b. 1933) is a Grammy winner and an inductee of the Blues Hall of Fame, the showman hailed as “The King of the Chitlin Circuit” has never achieved the widespread renown of B.B. King, Muddy Waters, or others whose names are sprinkled throughout this vibrant and personable account. This makes his fresh story more intriguing because he didn’t really achieve his acclaim until after the turn of the century, as a veteran artist in his 60s and 70s who had returned to his native South after decades knocking around the blues scene of Chicago. He seems somewhat like the last man standing—he and Buddy Guy, with whom he has forged a latter-day friendship, recounted here. The author chronicles an eventful life: formative years in Louisiana, where the son of a preacher first played on homemade instruments; musical apprenticeship in Arkansas, including a stint in a minstrel troupe, after leaving home in his early teens; his move to the blues capital of Chicago before he was old enough to drink. Though he made the right friends and developed something of a following—particularly in smaller cities in the Midwest—he never landed the big hit or lucrative record contracts. “From 1964 to 1971, my first seven years of recording, I had been on seven different labels,” writes Rush, who augmented his income with “day jobs, night jobs, a hot dog truck, and a barbecue joint.” He found a following in out-of-the-way joints, playing for older Black audiences, while other blues artists were finding favor with a younger, mostly White crowd. He became well known in the juke joints as a flashy entertainer, but his recent career surge has found him and his music returning to a rawer, roots-y sound. This book is an entertaining tale of “how I became an overnight sensation. It just took me fifty years to do so.”