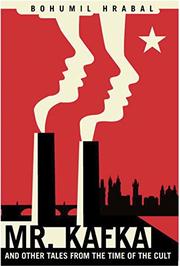 And Other Tales From the Time of the Cult

An often powerful and occasionally unnerving collection of stories from a half-century ago.

The “time of the cult” to which the subtitle refers is “the cult of personality” through which Stalin’s postwar dictatorship extended into Czechoslovakia. Published for the first time in English, the stories in this slim collection represent an era, a country, and an author who are all long gone, yet the timelessness of the best of these stories attests to a human spirit undimmed by the darkest of circumstances. “Life, strangely enough, is constantly being reinvented and loved...,” writes Hrabal (Harlequin’s Millions, 2014, etc.) in “Beautiful Poldi,” the elegiac story that closes the collection and brings the narrative of the titular Mr. Kafka full circle. “It is still magnificent as long as one maintains the illusion that a whole world can be conjured from a tiny patch of earth….Life is fidelity to the beauty that is exploding all around us even, at times, at the cost of our own lives.” The industrial Prague he depicts here finds women who are convicts or prostitutes (or both) relying on their powers of seduction, while men who are merchants, artists, or madmen (or all three) speak of ideals at odds with the survivalist instincts of the animals they have become. In “Ingots,” a doctor of philosophy proclaims, “I believe in people who wrestle with their fate,” while a woman suffers a brutal, dehumanizing gang rape. The psycho-political slapstick of “Betrayal of Mirrors” pivots around the obsessive repetition of a pair of mantras: as an artist insists (mainly to himself), “Can’t stop now! Must keep going!” while a stonemason laments, “It’s not easy being a decent communist these days.” The inscrutability of the opening “Mr. Kafka” leaves the reader off balance, but readers and characters alike adjust to a world gone askew.

The bleak humor of the surrealism finds a crack in the Iron Curtain.