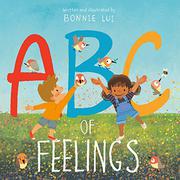 An alphabetical tour of emotions.

This British import mixes words that many young kids will know, such as brave, kind, and mad (the last defined in the American sense, as angry), with less-familiar ones such as overwhelmed and vulnerable. It even features at least one word that may be new to adults: “X is for Xenial….Xenial is being welcoming to strangers.” Compounding the difficulty here, the visual image of a Black kid dressed as a magician hugging a rabbit they’ve pulled out of a hat does not exactly illustrate xeniality (xenialness?). Other illustrations do a better job of helping readers understand the words being introduced. The illustrations feature racially diverse children and are usually paired in each double-page spread: “A is for Anxious. Anxious is feeling really worried about something. / B is for Brave. Brave is being nervous about something and doing it anyway.” On the A page, a brown-skinned kid cowers from the dragon that encircles their bed, as in a nightmare. Across the gutter on the B page, the ferociously scowling child confronts the now-intimidated monster. Kids will get an immediate sense of those two words. Animals, real and imaginary, often play a role in the pictures. The book will be best shared one on one or in very small groups, when children can really spend time examining the pictures and talking about their own impression of what is happening in each picture. (This book was reviewed digitally.)