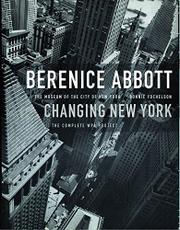 In 1935 Abbott (18981991), already an experienced documentary photographer, set out with a bulky view camera to capture Manhattan's streets and building facades, to provide a thorough record of how the city looked at one point in time. Over the course of four years she covered the entire city, working neighborhood by neighborhood, and produced some 400 photographs, most of them unpublished until now. Yochelson, a consultant for the Museum of the City of New York, which holds the collection, has done a careful job of assembling and annotating the work. The 420 photographs crisply reproduced here are of extraordinary value to anyone wanting a detailed portrait of the city during the Depression. Abbott's photographs of tenements and skyscrapers, of street scenes and housefronts, of tiny backstreet shops and elegant department stores, of newstands, el stations, piers, factories, and office buildings are fascinating. Many are also powerful works of art, such as a shot of sunlight streaming through elevated tracks onto an otherwise shadowy street of shops, or her beautifuly composed depictions of neighborhood storefronts. An elegant, eminently browsable record of Manhattan's cityscapes, including many now entirely vanished.