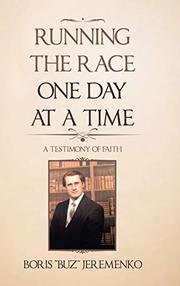 RUNNING THE RACE ONE DAY AT A TIME

A Testimony of Faith

An Austrian immigrant recounts his intricate journey in this debut memoir.

Jeremenko, the son of Austrian refugee camp immigrants who came to America in 1951 when he was 6 years old, structures his book around a series of short vignettes drawn from his memories, supplemented with a lifetime of vivid photographs. The author’s parents were “displaced persons” who ended up as farm laborers in Fort Wayne, Indiana. The bulk of the beginning of Jeremenko’s memoir describes the “typical Americana” of his Midwest upbringing as a healthy, uproarious immigrant boy with a distant, hard-drinking father and a caring, competent mother who did all the housework, child rearing, and extensive gardening. The author grew up, got a job at the General Telephone Company, and then joined the Marine Corps. He shipped out to Vietnam, where he saw a good deal of action and lost some friends. Jeremenko recounts that this preyed on his mind even decades later (“I carry the guilt of all my team members that I lost when I was in Vietnam”). He returned to civilian life, and much of the rest of the volume consists of his accounts of growing older and having children and then grandchildren. In his heartfelt book, the author shares some intriguing details about his experiences in America and Vietnam. But his writing throughout is a bit bland, which is a drawback since the types of memories he’s relating are seldom inherently dramatic. He writes about the time his father chased local boys who were stealing fruit from the family’s garden, for instance, and about his childhood filled with rotary phones, record players, and black-and-white TVs. Unfortunately, his recollections rarely say anything striking about these things. And his frequent invocations of his passionate Christian faith can sometimes seem artificial: “Isn’t it amazing what a difference sixty-plus years makes in the planting of a small evergreen tree in our yard to remind me of Christmas year-round?” he asks at one point. “Thank you, Jesus!” The end result is a narrated family photo album—priceless to Jeremenko’s own loved ones and friends.

A well-illustrated but uneven account of an immigrant’s life in 20th-century America.