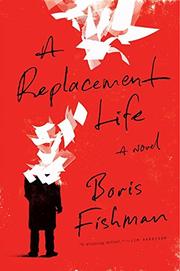 An ambitious young writer compromises his integrity for the sake of his Russian forebears in Fishman’s darkly comic, world-wise debut.

Slava, the hero of this tale, toils as a relatively anonymous researcher at Century, an esteemed New Yorker–style magazine. Though he’s a gifted storyteller, he’s relegated to writing snarky retorts to flyover-country news briefs. His hubristic ambition to write bigger things is seized upon by his grandfather, who wants him to write a narrative for an application to receive reparations from Germany for death-camp survivors. The grandfather wasn’t actually in the camps, but no matter: Slava is masterful at giving (and withholding) just enough detail to be persuasive, and soon, much of the post-Soviet Jewish diaspora in Brooklyn is asking for similar assistance. Instead of making a dour morality tale, Fishman mines this setup for comedy, satirizing the magazine’s preaching about accuracy (which proves to be conditional) and portraying Slava as an easily led intellectual schlemiel. Bolstering his indecisive character, Fishman has Slava juggling two romantic interests, one a Century fact checker, the other a fellow Russian. How to make such an uncertain man worth spending time with? The novel is largely carried on Fishman’s sharp wit, ear for dialect and close character studies, which capture the sociological nuances of everyone from preening magazine editors to doting relatives. (He writes of Brooklyn's Soviet expat community: “These unlike people had been tossed together like salad by the cupidity of the Soviet government, and now, in America, they were forced to keep speaking Russian…and they did, because a Ukrainian’s hate of Russian was still warmer than his love of an American.” Slava’s romantic and professional reckonings in the closing pages are inevitable, but Fishman thoughtfully raises questions of what Holocaust-era suffering is deserving of recompense.