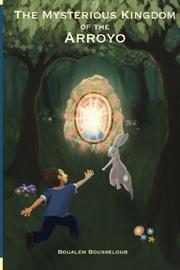 The Mysterious Kingdom of the Arroyo

A young boy is whisked into a magical world and given the daunting task of saving the world.

Ten-year-old Astor is spending time reading outdoors with his mother, Sarah, when a very large rabbit suddenly starts talking to him. Blanca, the cottontail rabbit, takes Astor on a walk through the arroyo, an area filled with flora and fauna, and they enter a portal to a magical world, the Palace of the Serene Soul, where animals talk to each other and goblets automatically refill themselves with nectar. There, Astor meets many characters, including a makeup-bedecked tortoise who can solve riddles, a pink mouse who serves as the palace nurse, and a human-sized owl named Professor Hoot-Hooty, the Seeker of Knowledge. Astor learns that he’s been summoned to the palace to undergo a test with the professor, who determines that he has a pure white soul, which is necessary to be a healer. Astor is then informed that Lady Irena—Guardian of World Peace, aka Mistress of Singing Waters, and the wife of Lord Iridio, Master of the Rainbow and Protector of the Arroyo—is gravely ill. With no one to protect world peace, her death would threaten the world’s peace. As a healer, Astor is tasked with healing her with his special talent: music. The story travels back and forth between the magical world and Astor’s other life, where his mother is suffering from depression after the death of his father in a car crash. Astor doesn’t realize it, but his special talent has the ability to heal people in both of his worlds. This engaging, well-written story features a memorable main character who, much wiser than his 10 years, shows empathy for all his fellow creatures. The supporting cast is equally well-fleshed-out, and readers will come to worry about what happens to them. The story also evokes both Greek and Native American myths, so it could supplement those topics in school. Additionally, the book tackles the issue of depression with grace and helps readers better understand the difficulties that people with depression face and the importance of treating them with compassion.

A thoughtful story about a boy who must save the world, with important lessons about empathy and understanding.