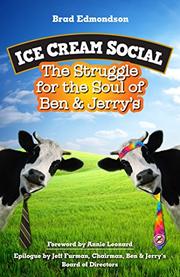 The Struggle for the Soul of Ben & Jerry's

A journalist and business consultant’s story of how a small Vermont-based company showed a money-hungry corporate world what could happen when employees “brought their consciences to work with them.”

When Ben Cohen and Jerry Greenfield started Ben & Jerry’s in 1978, their goals were simply to “make enough money to live on while they enjoyed themselves.” Their hard work and deliciously innovative ideas brought them national notice just a few years later. Despite their ambition to create “the best ice cream in the world,” they were reluctant to grow Ben & Jerry’s beyond Vermont since both realized that big businesses were “harmful to the environment [and] to…employees.” So they worked on ways that would allow their company to pursue expansion alongside objectives that benefited workers, communities and the planet. The end result was the development of a radical business vision called “linked prosperity.” As Ben & Jerry’s prospered, so would everyone and everything that had contributed to its success. The company worked with product suppliers dedicated to helping marginalized groups or the manufacture of eco-friendly products. And it aligned itself with progressive social movements like the anti-nuclear campaign and with nonprofit human welfare organizations like the Children’s Defense. However, the larger Ben & Jerry’s became, the harder it struggled against internal and external pressures to focus exclusively on profit. Multinational giant Unilever eventually bought the company out in 2000. Nevertheless, the deal it struck with Unilever gave it enough control over its mission that it was able to keep up the fight to remain socially responsible. Rich in details about the colorful yet committed individuals who built Ben & Jerry’s, Edmondson’s book shows what is possible when people dream together with integrity and purpose.

Uplifting reading about the little company that could.