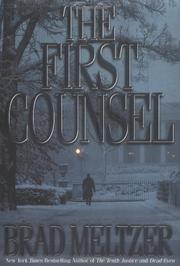 Meltzer’s third high-octane thriller (Dead Even, 1998, etc.) sinks a junior White House staffer in the world of woes that result when he accepts a date with the president’s daughter.

Accepts a date, because Nora Hartson is even more hard-charging than her father: she’s a determined, demented go-getter who knows and takes whatever she wants. What she wants now out of Michael Garrick is ditching her Secret Service escorts and going on a joyride to what turns out to be a gay bar in Adams Morgan, where she and Michael spot his boss, straight-arrow White House counsel Edgar Simon, and tail him to an isolated place where he drops off a packet containing $40,000—$10,000 of which Nora impulsively retrieves just ahead of the addressee. Things rapidly go from bad to worse: the cops catch Michael driving around with the undocumented cash; when he tells his story to White House ethics chief Caroline Penzler, she replies that Simon’s just told the same story about him; then Penzler’s murdered, with every indication that Michael admitted her killer to the impregnable Old Executive Office Building. On cue, the press closes in, the FBI closes in, the suspected killer closes in—and Michael’s left to battle them all, fighting for his job, the president’s reputation, and his life, wondering all the while how much he can trust the friends he’s counting on to feed him information and lie on his behalf. He’s also increasingly certain that the First Daughter who got him into this mess is a piece of work beyond his wildest imaginings.

Meltzer doesn’t weigh his supernova plot down with niceties like political policy (the president could be Bush, Gore, or Grover Cleveland), authentic spycraft (the cloak-and-dagger stuff sounds lame even to Michael), or psychology (apart from Michael, every single character remains shadowy except the one code-named Shadow). Nothing gets in the way of the adrenaline jolt Meltzer delivers like a master.