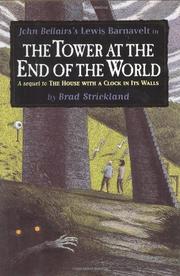 THE TOWER AT THE END OF THE WORLD

In comparison to the original, this addition to the series begun with John Bellairs’s The House with a Clock in Its Walls (1984) falls short. Strickland seems capable of plotting a rousing world’s end full of magic and doom, using many of the same characters. Misplaced is that slight touch of self-deprecation and humor of Bellairs that made Gorey the perfect illustrator. We’re still in the 1950s and Lewis and his wizard Uncle Jonathan are off for a vacation with Rose Rita and Mrs. Zimmerman the neighboring witch. Where to go, but to the exact location of a supernatural tower that threatens the entire planet. Once again the wizard and the witch are caught up in their efforts to extricate themselves from danger and it takes the common sense of a boy and his friend to save not only themselves and the adults, but also the whole world. Tension mounts as events and clues unfold. Each step seems placed into a logical framework if you accept the rules at play, but the cast seems wooden, the narrative flat, and ultimately the fear never manages to creep into your bones. For fans of Bellairs hungry for another dose of his spellbinding mystery, this will serve to deaden the thirst, but not quench it. (Fiction. 10-14)