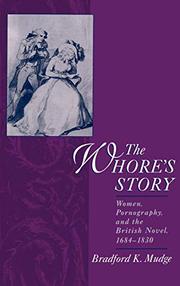 A reassertion of the female ingenuity that enabled market-minded English literary fiction and its unfettered alternate to flourish.

Providing context via today’s struggles over pornography (a term coined only circa 1864), Mudge (Sara Coleridge, 1989) evenhandedly pits Dworkin and MacKinnon’s ordinances against the bottom line of performance artists such as Lydia Lunch: “Reality is an X-rated trip.” With bite, he explicates the late-17th-century emergence of a cash-sex-fiction nexus—exploiting quack medical manuals, satires and sermons, and licentious verse—to unveil how Behn’s high-flown Love-Letters between a Nobleman and his Sister ripened by 1830 into “Spinster” Mary Wilson’s forthright Whore’s Catechism. While masquerade entertainments provided rich opportunities for baroque prostitutes, independent women who wrote about passion for money were castigated as soulless fiends depriving the state of maternal benefits, infecting the body politic, and preying upon weak-willed men. Legal eradication failing, Defoe’s shrewdly conceived Moll Flanders and Roxana affected last-minute rehabilitations. Richardson undertook to reform both novel and reader by celebrating Pamela, whose virtue—chastity—was richly rewarded on the marriage market (Fielding’s Shamela, on the other hand, laughed). During King George IV’s scabrous divorce trial, the prurient press took cunning Queen Caroline’s side and made a fortune. While government turned justice into entertainment, porn finished emancipating itself from literature: nowadays it is the more “artistic” pornography that is most likely to be brought to trial. Period prints (showcasing Rowlandson) quicken the argument, and excerpts sate curiosity about most of these backdated textual incendiaries. Only occasional jargon or excess recapitulations impede pleasure. One emerges with views enlarged: if the best things in life ought to be free, who foots the bill for censorship?

A scholarly romp that furthers debate on just whose interests are served by suppressing or canonizing sexual representation. (26 b&w figures)