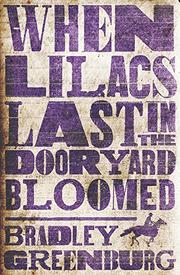 WHEN LILACS LAST IN THE DOORYARD BLOOMED

The Civil War over, James and Lily McGhee, with his parents, Amos and Clara, want land. Both men are woodworkers where there’s no work for blacks. The family settles briefly in Tennessee, and James’ oldest son, Clayton, whose point of view powers the narrative, finds a job in a mercantile store. James rides to Indiana searching for farmland, facing prejudice at every point, until LaFayette, where he stops two ruffians from committing rape. He’s jailed for his trouble, but after the affair is sorted out, he finds a derelict farm outside town. He’s also made a friend of the local sheriff, Colegrove, one of many intriguing characters who appear, play a pivotal, solid role, and then frustratingly disappear: Nashville storekeeper, Miss Lenore; Moberly, Fabrizio, and the Llewellyns, whites who help defend the McGhees when brutes acting for the rich Henderson Jeffries attack their farm; and Judah Furnish, a psychologically damaged veteran symbolic of war’s tragedies. Greenburg’s familiarity with the locale lends credence. His characterization of the McGhees and their enemies, the Jeffries, are of a type but nuanced. Other characters—an Irish gangster, a good-hearted Polish teamster—are more familiar. Leaping forward, the second portion compresses multiple years into exposition, establishing conflict between Henderson’s son, Peter, and Clayton. Peter schemes with the KKK–like Horse Thief Detective Association to seize Clayton’s farm. The drama here focuses more on the Jeffries family, with unhappy, laudanum-addicted mother Annabelle's fight to wrench her son from his father’s influence overshadowing the book's most powerful element—the post-bellum battle of African-Americans to prosper against prejudice: "Without your fear they have to kill you to stop you getting on with your life."

A worthy historical-fiction exploration of the African-American struggle for freedom.