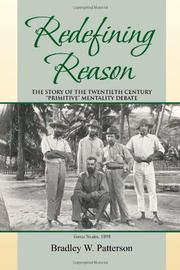 The Story of the Twentieth Century "Primitive" Mentality Debate

A history of social anthropology and its pursuit of “reason” through the 20th century.

Neuropsychologist Patterson takes on the daunting task of tracing science’s view of reason as it relates to anthropology, from the time of Darwin to the present day. In doing so, he unveils a number of internecine arguments within the scientific community, as well as the hand-wringing in Western culture that has led to a near abandonment of the study of reason altogether. Patterson’s tale begins with Victorian-era anthropologists in the field who studied “savage” or “primitive” peoples in a race against time—before their cultures would be dramatically changed by encroaching Western ways. Critically influenced by Darwin, Patterson explains that, “At heart, early professional anthropology was a scientific search for human origins and evolutionary history.” In studying indigenous peoples, these scientists took for granted that European-based cultures were superior and that Europeans were more mentally advanced than “primitive” peoples. As the 20th century unfolded, however, various influential scholars and the schools of thought they initiated changed these assumptions. By 1950, some scholars were questioning whether social anthropology could even be considered one of the sciences. Sartre questioned the field’s reliance on reason as a measure of people’s abilities, and by the 1960s and 1970s, the Eurocentric character of traditional anthropology was under severe attack, leaving the whole field with a “crisis of representation” it is still battling to this day. Patterson provides a wealth of information in an approachable but sometimes melodramatic form (“The maw of eternity had simply opened and claimed him within a few blinks of an eye”). Though open to the general reader, Patterson’s work will best lend itself to students of anthropology or sociology, and it will be a worthwhile reference for the often intractable arguments affecting such fields and the sometimes larger-than-life personalities who have shaped them.