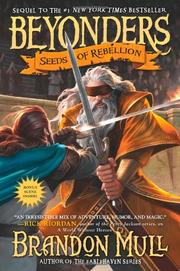 From the Beyonders series, volume 2

Plenty of hard-fought skirmishes and an entertainingly diverse supporting cast keep this quest fantasy’s middle volume on the right track.

Finding his way back to Lyrian from this world, hero-in-training Jason rejoins fellow “Beyonder” Rachel and several Lyrian allies in a nascent rebellion against evil emperor/wizard Maldor. With imperial troops constantly in hot pursuit, the company survives attacks from giant swamp monsters, blood-craving zombies, plant people and others, as well as encounters with deadly natural hazards, to gather special weapons and allies, reluctant or otherwise. Though surmounting several individual challenges, Jason is largely along for the ride here, but others pick up the slack—particularly Rachel, struggling to control rapidly developing magical talents; Ferrin, a “displacer” with suspect loyalties who can detach while continuing to use hands, eyes or any other part of himself; and Aram, a pipsqueak by day but a giant warrior at night. The author threads glib banter (“Everybody should get to clobber a princess at least once”) and quirky twists into his already-speedy plot to ensure that there’s never a dull moment. He brings the episode to a close with an ominous but refreshingly lucid prophecy that sends cast members off on separate missions to set up the closer’s climactic confrontation.

Full measures of swordplay and sorcery, along with a healthy grain or two of salt added to keep things from getting overly earnest.