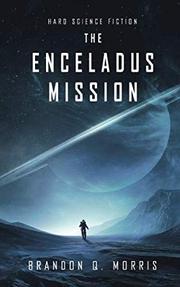 A probe’s discovery of organic molecules on a moon of Saturn—proof positive of alien life—prompts an international team of scientists to embark on a dangerous journey in Morris’ (Der Riss, 2018, etc.) hard-sci-fi novel.

In 2031, a long-range automated spacecraft confirms biological material on Saturn’s ice moon Enceladus, where a liquid ocean exists beneath the frozen surface. The prospect of extraterrestrial life awaiting discovery in the solar system prompts a worldwide effort under NASA to recruit, train, and finally send several scientists on a 2046 mission to explore below Enceladus’ surface in the Valkyrie, a manned vessel described as “a drill that could swim, not a submarine that could drill.” Its co-pilot is Martin, a cool-headed Jet Propulsion Laboratory contractor who seems to have no fear of death due to a personal tragedy; the epic unfolds from his point of view during the risky, monthslong voyage. Morris is an exponent of highly technical sci-fi that details aerospace exploration and innovation practically down to the last rivet. Happily, he also pays heed to the human element, an aspect that can feel poorly engineered in many other hard-sci-fi books. Early on, for instance, the crew deals with an emergency when the mission commander, Amy Michaels, who’s in a relationship with engineer Hayato Masukoshi, becomes pregnant despite the fact that doctors told her that she was infertile. Morris also gets plenty of altitude from the brainy, minuscule crew’s problem-solving, as they cope not only with the challenge of having another mouth to feed, but also missing supplies and malfunctioning propulsion. The fact that the stakes on Enceladus may only involve unicellular organisms is no drawback; the author’s gift for narrative even endows the collision between a space rock and an automated vessel with something like emotional weight. The book also adroitly handles the tricky question of alien intelligence. Lengthy nonfiction postscripts, written in a similarly supple style, describe the science in the story; it’s hopefully not a spoiler to note that the Valkyrie is an experimental concept in real life (and the head of the firm behind it, as well as businessmen Jeff Bezos and Elon Musk, is mentioned in the novel).

A space odyssey that’s worth taking.