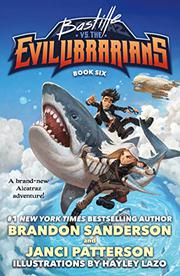 BASTILLE VS. THE EVIL LIBRARIANS

From the Alcatraz Versus the Evil Librarians series, volume 6

Previous prognostications of failure and doom notwithstanding, this bustling entry features miraculous survivals and just deserts for the biblio-baddies.

Switching narrators in the wake of devastating deeds at the end of The Dark Talent (2016), the co-authors pick up the action with stern, stab-happy Bastille describing her rescue of traumatized Alcatraz Smedry from a Library of Congress that is filling up with lava, then a desperate effort to keep ultra-evil librarian Biblioden the Scrivener from forcing the world’s remaining Free Kingdoms to check themselves out permanently. Despite her own forewarnings of a disastrous ending and stern suggestion to start with Volume 1 for the backstory, she does fill in enough of what’s going on for readers to keep pace—and in characteristically take-no-prisoners tones, lays out a rip-roaring tale in which she fulfills her role as Alcatraz’s protector with plenty of brisk (if bloodless) sword work and an unshakeable loyalty that, along with the occasional punch, draws him out of a paralyzing slough of guilt and self-loathing. A climactic battle features a horde of bloodthirsty kittens and a ravenous, punning monster—followed by hints that surviving librarians may be taking up worthier missions and, since Bastille insists on the veracity of this account, credible reasons why people the world around have talents for being late, breaking things, and like peccadillos. Most of the heroically posed figures in Lazo’s realistically modeled illustrations are light-skinned.

Rescues and kittens by the carload, with a bit of inner growth on the side.