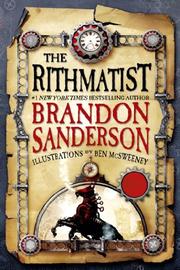 The inhumanly prolific author of the Mistborn trilogy conjures similarly baroque magic for a lapidary series opener aimed at a somewhat younger audience.

Set on an alternate, steampunk Earth among the many squabbling United Isles of America, the tale pits Joel, teenage son of a poor chalkmaker, and allies against mysterious baddies who are snatching students of exclusive Armedius Academy. Among other subjects, the Academy teaches Rithmatics—a geometry-based system of offensive and defensive shapes chalked on flat surfaces and then animated by those endowed with a special magical ability in a ceremony as children. Though he himself cannot bring his figures to life like a true Duster, years of obsessive study have made Joel a brilliant theorist and designer. His skills plunge him into the middle of the kidnapping investigation and ultimately lead to hints of a larger plot to release floods of deadly wild “chalklings” against humanity. Stay tuned. Between (and occasionally within) every chapter, labeled diagrams and smaller drawings lay out an elaborate but generally logical set of rules and behaviors for Rithmatical attack and defense.

Fantasy readers should devour this well-crafted mix of action and setup, enriched by a thoroughly detailed cultural and historical background and capped by a distinctly unsettling twist.