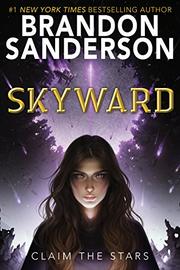 From the Skyward series, volume 1

Eager to prove herself, the daughter of a flier disgraced for cowardice hurls herself into fighter pilot training to join a losing war against aliens.

Plainly modeled as a cross between Katniss Everdeen and Conan the Barbarian (“I bathed in fires of destruction and reveled in the screams of the defeated. I didn’t get afraid”), Spensa “Spin” Nightshade leaves her previous occupation—spearing rats in the caverns of the colony planet Detritus for her widowed mother’s food stand—to wangle a coveted spot in the Defiant Defense Force’s flight school. Opportunities to exercise wild recklessness and growing skill begin at once, as the class is soon in the air, battling the mysterious Krell raiders who have driven people underground. Spensa, who is assumed white, interacts with reasonably diverse human classmates with varying ethnic markers. M-Bot, a damaged AI of unknown origin, develops into a comical sidekick: “Hello!...You have nearly died, and so I will say something to distract you from the serious, mind-numbing implications of your own mortality! I hate your shoes.” Meanwhile, hints that all is not as it seems, either with the official story about her father or the whole Krell war in general, lead to startling revelations and stakes-raising implications by the end. Stay tuned. Maps and illustrations not seen.

Sanderson (Legion, 2018, etc.) plainly had a ball with this nonstop, highflying opener, and readers will too.