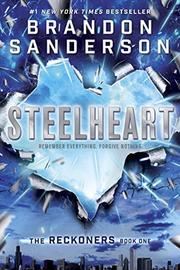 From the Steelheart series, volume 1

It’s certainly a tried-and-true formula. Twelve years ago, a mysterious Calamity began turning random ordinary humans into evil Epics gifted with various combinations of superpowers (and also, always, some Achilles heel). Now, 18-year-old David Charleston manages at last to make contact with a cell of Epic-killing Reckoners led by legendary mastermind Jon Phaedrus. Then it’s on to a nonstop thrill ride that begins with the killing of David’s father 10 years before and roars through car and motorcycle chases, secret missions, huge explosions and hails of gunfire with high-tech weaponry to a climactic battle with Epic Steelheart. He’s bulletproof, shoots energy balls, has transformed the entire Chicago area into solid steel with a wave of his hand and wears a stylish silver cape. Shockingly, the book closes with the stunning revelation than not all Epics are evil through and through. As further sign that Sanderson (Rithmatist, 2013, etc.) isn’t taking any of this too seriously, the cast of Epics includes not only the likes of Steelheart, Faultline and Deathpoint, but Pink Pinkness and El Brass Bullish Dude, and some of their powers are equally silly. Stay tuned for sequels.