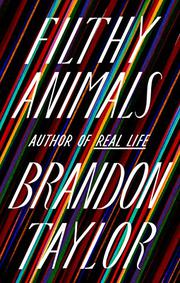 Lionel, who animates several of the linked stories in this high-wire act of a collection, is a Black, queer graduate student at an unnamed Midwestern university—much like Wallace, the protagonist of Taylor’s Booker Prize–shortlisted debut novel, Real Life (2020). He studies pure math and is recovering from a suicide attempt. At a party, he mimics other grad students’ laughter because he doesn’t innately feel the social cues most people would. But Lionel isn’t devoid of emotion. In fact, the “feeling of falseness vibrating in his sinuses” from pretending to enjoy social events utterly wears him out. So when Lionel becomes involved with bisexual Charles and his girlfriend, Sophie, both of whom are studying dance, the frisson may be too much for him: “Some lives, Lionel thought, had to be ordinary or ugly or painful. Ending your life had to be on the table.” Other stories share this rueful, sepulchral cast of mind. In “Little Beast,” babysitter and private chef Sylvia knows that “the world can’t abide a raw woman.” In the title story, one character’s “favorite act of violence is to burn holes into people’s clothes when they aren’t looking.” The settings here are bleak—alienated suburbs; petty college campuses—and the mood unsparing. But the daring in these stories is bracing. Despite its accolades, Taylor’s debut novel could feel listless; this collection is a deeper achievement.

Taylor tackles a variety of taboos and articulates the comfortless sides of the soul, and it's thrilling to watch.