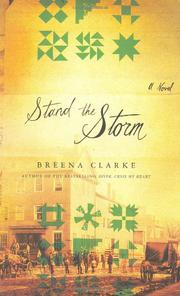 After her Oprah-pick debut (River, Cross My Heart, 1999), an African-American novelist delivers a compassionate portrait of the terrors and hopes of slaves.

With its slightly clipped period language, coolly measured tone and rich supply of telling detail, Clarke’s second novel delves into a compelling social panorama of black servitude in Washington, D.C., as the Civil War begins. The book’s heart is the Coats family—Sewing Annie and her equally dexterous children, Gabriel and Ellen—initially bondspersons, then freed, around whom forms a circle of other black characters, some escaped, some raped and beaten, some passing as white. Their individual experiences include variously vicious, pragmatic or, very occasionally, kind owners, while beyond them the vast apparatus of slavery pulls in catchers, traders, auctioneers and members of the underground freedom network. Although the Coats family works hard at tailoring, sewing and knitting, trying to amass enough money to flee north to Canada—the opposite of being “sold south,” the worst possible fate that could befall a slave—they also offer assistance to victims of savage abuse like Mary, who eventually becomes Gabriel’s wife. The war further threatens the group, as owners attempt to reclaim freed slaves while “contrabands” (slaves following Union soldiers) flood the city which, now more than ever, is a heaving mass of soldiers, rats, disease, disorder and opportunism. The story winds through the war (with Gabriel fighting alongside the colored troops) to reach a sober conclusion that nevertheless heralds change.

Clarke’s sensitivity and her lyrical, earthy narration bring a freshness to the somber subject matter.