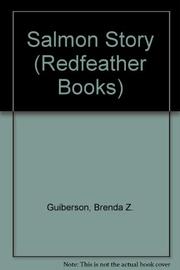 In the Redfeather series, an easily read yet detailed discussion of the Pacific Northwest's salmon. Guiberson, whose picture-book nonfiction (Cactus Hotel, 1991; Spoonbill Swamp, 1992) has been very well received, uses short, simple (but not simplistic) sentences to describe the salmon's life cycle; its place in the ecosystem and in Native-American culture; the disastrous effects of changes to its environment since the 19th century; efforts to rescue the salmon (limiting catches, building ``ladders'' around dams, correcting erosion, changing farming patterns, etc.); and related research. A few handsome color photos brighten up a text that's also supported by numerous other illustrations, including useful diagrams. A well organized, informative book that reaches beyond its own subject by modeling the kind of thought and inquiry appropriate to any environmental- -or, indeed, scientific—topic. Bibliography (lengthy, serious, and varied); index. (Nonfiction. 7-12)