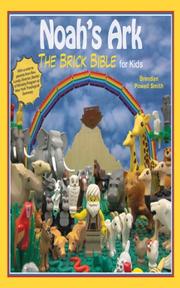 The Brick Bible for Kids

This interpretation of the story of Noah and his Ark combines the familiar Old Testament story with perennially popular LEGO® building blocks used to create the illustrations.

The story is told in contemporary language with no reference to a particular version of the Bible or location of the relevant verses. God is depicted as an old, bearded white (or yellowish plastic) man in a white robe, and the animals and human characters are all familiar LEGO® shapes, humorously arranged in creative scenes. Smith’s series of Bible stories, the Brick Testament, has provoked controversy due to the violence depicted in some illustrations. This latest addition to the series does not shy away from the difficult issues inherent in the story. Blood (translucent red LEGO® blocks), battles and burning denote evil behavior ("God looked at the world and saw that all the people were very bad"); drowning people and the torso of a body can be seen as the waters rise, and (smiling) skeletons litter the ground when Noah and his family exit the Ark. A note for parents by a religious educator is included with guidelines for explaining the Noah’s Ark story to children.

Those who favor a literal interpretation of Bible stories and fans of Smith’s popular series will probably feel that this floats their boat; those looking for a gentler (and less visually ridiculous) introduction to the popular story should look elsewhere.