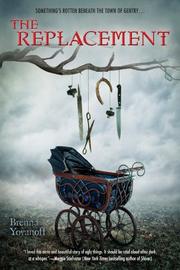 Mackie's nauseated by the scent of blood, is burned by cold iron and would die if he entered a church. None of this helps him avoid notice in his hometown, where close-mouthed neighbors hang horseshoes and leave milk in the garden. No quaint old-world superstitions, these; in the town of Gentry, a child dies mysteriously every seven years. Mackie's been raised to avoid notice, so nobody will recognize him for the changeling his parents and adoring sister know him to be. But with another baby apparently dead and blood and iron all over town, Mackie's having a hard enough time staying upright, let alone under the radar. Soon the sickly boy meets the Morrigan and her court: a mishmash of Celtic mythology with British folklore, elfpunk music and adorable Tim Burton–esque horrors. There's romance and rescue (though mercifully no Edward Cullen types to replace the tale's endearing original couple). Some of the urban-fantasy elements get dropped in the crowd partway through, but enough grotesque goodies remain to keep this a fast-paced, dark delicacy. (Urban fantasy. 12-14)