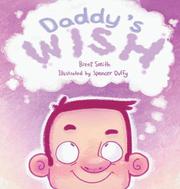 What to expect when you’re expecting, in epistolary, picture-book form.

In playful rhyme, a father writes to his daughter about what it means to be a man raising a young girl. First comes the excitement of knowing that the mother is pregnant, which the expectant parents gladly announce to the world. But when Mommy asks, “Daddy, what do you hope the baby will be?” he’s unsure how to respond. At first, he imagines that he wants a boy, but then he’s cheered by the prospect of raising a girl—although he doesn’t quite know what that would entail. Nevertheless, he believes that he “could learn so much” and that “it would surely change his world.” Smith’s debut is honest about expectant fathers’ anticipation, noting how Christmas loses its luster for Daddy without a baby to share it with. While he waits, he fantasizes about having tea parties or going to the park with his daughter. Debut illustrator Duffy’s images are soft, colorful, and cartoonish—and they often include bits of humor, as when a picture of a fetus puzzling over a map pairs with “you were on the way.” Some of Daddy’s musings could have been less gender normative, but as a love letter from father to daughter, this book is sure to delight.