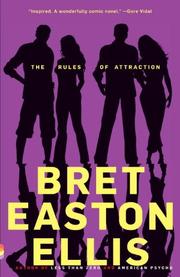 THE RULES OF ATTRACTION

Having yawned at hyper-decadent L.A. in Less Than Zero (1985), Ellis here seems just as bored with the ultra-hip rich kids wasting time by getting wasted at super-chic Camden College (read: Bennington) in chilled-out New England. For lack of an apparent plot or point, Ellis strings together a series of deliberately listless vignettes, each narrated by one of the many terminally numb characters who sleep walk through this nightmare. At the center of the various competing narratives is the "so good-looking" Sean Bateman, who describes his college pursuits thusly: "Get drunk, screw constantly." And he does both with little concern for anyone else. He lies, cheats, and shoplifts mainly in an effort to cover up the fact that he's mega-rich, but also because he's just plain nasty—to his dying father, his yuppie brother, and to all his lovers at school, especially Paul, an unabashedly gay drama major who's self-deluded enough to misread Sean's cryptic remarks as true love. Sean's all-purpose comments ("Rock 'n' roll" and "Deal with it") eventually infuriate his other main squeeze, Lauren, who took up with Sean only because her lover, Victor, is in Europe. The other indistinct voices heard here belong to Stuart, who lusts for Paul at a distance; Mary, who leaves anonymous mash-notes for Sean, then slashes her wrists when he ignores her at a "Dressed to Get Screwed Party"; Victor, who doesn't even remember Lauren; Mitchell, who's trying to forget his homosexual past with Paul; and so on in this bisexual daisy-chain of a novel. Only Bertrand, a French student who writes articles for the school paper on herpes and Ecstasy (the drug), sounds distinct—his brief bit is transcribed in Ellis' Intermediate French. A few Camden characters from Jill Eisenstadt's new novel (see above) have cameos here—a much-publicized in-joke between these fellow Benningtonites. Without an authorial voice of any kind, it's difficult to blame Ellis himself for the shaky grammar and inept prose, but it does make you wonder.