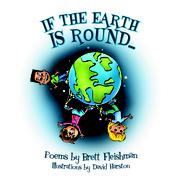 IF THE EARTH IS ROUND

Comedy is at the center of this rhyming poetry collection from Fleishman with cartoon illustrations by Harston (The Old Testament Sticker Puzzle, 2017, etc.).

Fleishman’s 21 poems for young independent readers have easy-to-grasp vocabulary and plenty of rhymes. Early verses involve a wide variety of topics, such as a ghost who only fits in on Halloween, a boy who carts his piano up 53 flights of stairs for music lessons, and The Wizard of Oz’s Dorothy Gale’s farmhouse for sale (complete with dead witch). A standout is “Baby Piper,” in which a child smells something funny and agrees to help change the baby, so long as he doesn’t have to “wipe.” Others are less humorous, such as “Lucky Girl,” in which a gross-out character looks forward to having a wife, and the title poem, which questions the shape of the earth. The tone is reminiscent of classic poet Shel Silverstein’s, but the humor never quite reaches the same level, and some turns of phrase (such as “It eats food of other teddy bears”) read awkwardly. Harston’s boldly colored illustrations, which feature diverse children, add intriguing details, revealing a dangerous staircase in one poem and a roller coaster hazard in another.

A collection that may elicit a few giggles, and its illustrations may draw a more reluctant crowd.