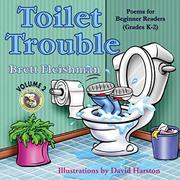 In this sequel, Fleishman (Twist and Shout!, 2017, etc.) again provides simple-to-understand comic verse for young readers. Don’t be put off by the book’s title; the 20 poems collected here don’t focus on gross-out humor. Many are pieces that depend on Harston’s (Twist and Shout!, 2017, etc.) bright, cartoonlike illustrations, which show diverse characters, for necessary context. For example, the first verse, “Neighbor,” is merely two lines long: “I just met my neighbor. He’s a very friendly guy. / He has 20 ovens. Gee, how strange. I wonder why?” Speculation is put to rest on the facing page, which shows a chef holding a tray of freshly baked muffins. Similarly, the four-line “Ice Skating” advises readers to “never skate the inner part,” which makes sense only with the image, depicting a shark’s fin emerging in a hole near center ice. Sometimes, though, the author and illustrator miss a beat; a crocodile who gets a birthday gift of Crocs is funny, but the picture reveals only the wrapped present, not the juxtaposition of croc/Crocs. Fleishman at times adds a lesson to his verse, but not always successfully. “Butterfly Catchers,” for example, anthropomorphizes the insects, teaching incorrect biology and making young entomologists feel guilty for the wrong reasons. (Some of the creatures are endangered, but there are no mother and baby butterflies whose hearts can be broken.)

Children may enjoy the silliness and rollicking rhythms despite a few flaws.