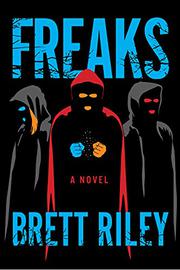 From the Freaks series, volume 1

Christian, proudly out as lesbian since sixth grade, and her friends—geeky Micah, mousy Gabby, and uptight Jamie—inadvertently open an interdimensional hole by playing with an old book of spells. It somehow leaves them with a diverse mix of abilities, from shooting flames to flying. Only Micah burns to repay their trio of bullies for years of pantsing, swirlies, threats, and humiliating pranks. The other three take broader views, which turns out to be a good thing, as a cunning, telepathic, blood-sucking monster from another dimension has also come through the hole to crush heads and feed on residents of their small Arkansas town. Riley goes for the gusto, opening with raw language and vividly explicit incidents of bullying followed by rising general terror punctuated by sprays of blood. He also stirs in some juicy complications, as tracking and battling the monster requires the self-styled Freaks not only to learn to control their powers and rein in the half-deranged Micah, but somehow find a way to work with one of the bullies who had been lurking near the spellcasting and has come away with superstrength and the emotional stability of the Hulk. Both unresolved internal conflicts and the revelation that there are more monsters out there promise further entries. Christian and Micah present White; Gabby is Jewish and Latina, and Jamie is African American.

Twists aplenty in a gorefest replete with violent emotions and events.