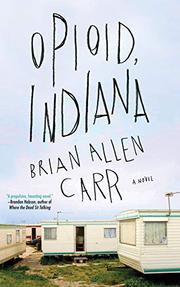 An orphan has an eventful week when he’s suspended from school.

This new book by Carr (Sip, 2017, etc.) is painful to read but wonderfully crafted and artfully poignant in its reflection of our times. The narrator is 17-year-old Riggle Quick, the Holden Caulfield of a rural Indiana in the depths of the opioid crisis and the racism empowered by the president of the United States. First, Riggle gets suspended because some jerk in his high school turns in a THC vaporizer, claiming it’s his. He spends the rest of his week of suspension exploring the peculiar world he’s trapped in, having been sent there from Texas after his parents died. He sees Black Panther with his best friend, Bennet, but first has to shave Bennet’s head because he’s biracial and is just light enough to pass without his Afro, so he won't get hassled by the cops for cutting school. We learn Riggle’s dad was a truck driver who died in a crash, and while it’s not called out, it looks like mom OD’ed. Riggle has the hots for his aunt (by marriage) Peggy, but he’s also been charged with finding his Uncle Joe, a junkie who’s gone missing. Riggle’s poignant, candid narration is punctuated by that of Remote, a shadow-puppet bird invented by his mother who tells Riggle fables about how each day of his lousy week was named. The most delightful sections come when Riggle, who doesn’t know what the hell he wants to do with his life, barges into a restaurant called Broth and convinces the caustic chef to take him on as a dishwasher. There’s also serious, painful stuff here: “Sometimes you feel so terrible that all you know is that you need something, and when people feel that way, they go out looking,” says Riggle. Finally, Carr slips in a great word here that Riggle borrows from a Latina friend in Texas who asked him the first day, “You a smuggler or a struggler?”

The confessions of a teenage struggler who just needs some time to figure it all out.