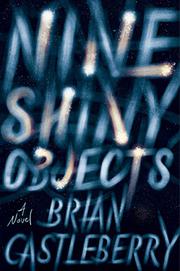 This novel’s nine chapters stretch across four decades at intervals of five years. Each has a different main character, and their settings crisscross the country. The book opens in 1947 with Oliver Danville, a “washed-up stage actor” and pool shark, who witnesses a friend’s murder and decides to change his life. When he reads a newspaper story about a military pilot who saw a group of UFOs, the “shiny objects” of the title, he’s galvanized by a vision of a better world. After a chance meeting with a farm family, Oliver takes off, farmer and wife in tow, for the West. Five years later, Oliver, now called the Tzadi Sophit, is the leader of a California cult that aims to create a multiracial utopia. In 1957, he and his followers move across the country into a newly built town adjacent to a Long Island suburb and are violently attacked by some of their neighbors. The echoes of that terrible night shape the main characters in the rest of the chapters: a young black man embarking on an intellectual life in Harlem, a salesman in Florida who makes a wild career change, a woman who hosts a conspiracy-theory radio show in Phoenix, another woman whose husband was the ringleader of the attack, a teenage girl whose grandparents and parents were targets of the attack, and finally an old man, the son of Oliver’s first followers, still on their farm and haunted by the ghost of his brother. Several characters recur, including Max Felt, who was a boy during the attack and grows up to be a rock star and something of a cult leader himself. Max and Oliver remain mysterious characters whose thoughts the reader has little access to, and the plot is built around mysteries as well—many chapters end in a cliffhanger without resolution. But Castleberry maintains deft control of the novel’s arc, making satisfying connections and bringing rich characters to life.

Memorable characters inhabit a surprising, engaging story of American idealism and its dark opposite.