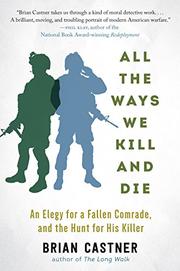 ALL THE WAYS WE KILL AND DIE

An Elegy for a Fallen Comrade, and the Hunt for His Killer

The search for the story behind an IED death leads to the history of the post–9/11 wars and the lives of the men and women who fight them.

Coming to terms with the details surrounding the death of a fallen comrade is often both personal and businesslike. In Castner’s (The Long Walk: A Story of War and the Life that Follows, 2012) latest book, it is almost entirely personal. No longer on the job as part of an Air Force explosive ordnance disposal team, the author investigates his friend Matt’s wartime death to answer some of his questions and the demons that lived alongside them. Castner already had intimate knowledge of what Matt was doing every day in Afghanistan as part of the EOD team, and he used that foundation to find the personal stories of others who survived IED blasts, men and women who were crucial in the search for “the Engineer” of the bomb and the way war has changed for the current generation of soldiers. Castner’s personal drive shines through the investigation, providing an intimacy that draws readers in. Not just along for the ride, readers will be equally invested with the author in finding the elusive man behind the IED technology. Castner does a beautiful job of putting together his puzzle, weaving all the seemingly disparate elements into one cohesive whole. Covering all aspects of his experiences, the author makes learning about a week in the life of a drone pilot as integral to the story as understanding how insurgents target specific military vehicles. Castner’s writing is evocative and engaging, completely absorbing from beginning to end.

A must-read for military buffs and a should-read for anyone who has given even a cursory thought to the U.S. efforts in Afghanistan and Iraq.