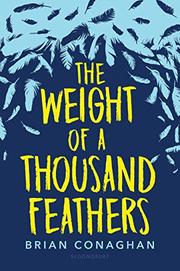 THE WEIGHT OF A THOUSAND FEATHERS

A teen struggles with just how far he’s willing to go for his terminally ill mother.

While most kids his age are arguing with their parents over curfews and screen time, Scottish 17-year-old Bobby Seed is his mother’s caregiver. Mum has secondary progressive multiple sclerosis, a painful and debilitating disease of the central nervous system. There’s no pretty way to say it: Mum is going to die. Bobby also looks after his 14-year-old brother, Danny, who acts much younger than his age (he seems to have an undiagnosed cognitive disability; their mother wanted to avoid labeling him). In addition to making sure Danny brushes his teeth and gets to school on time, Bobby tries to protect him from their mother’s prognosis with lies and half-truths. Mum’s health is rapidly deteriorating, and she makes a request that changes everything: She wants Bobby to end her life. Bobby loves her more than anything, but can he take away her pain by taking her life? Bobby’s first-person narration is a masterful and very realistic blend of sarcasm, shame, hopefulness, earnestness, and anger. His emotional ups and downs parallel MS’s vicious cycle of relapse and recovery. Awkward moments with his crush, Lou, the ultracool American guy who drives a vintage Vespa, and lots of ribbing from Mum add a touch of comic relief to temper the story’s seriousness. Assume whiteness throughout.