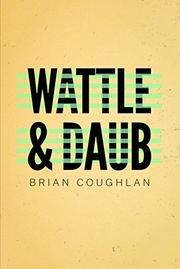 Very brief stories with an absurdist flair comprise this debut collection from Ireland.

Coughlan’s first book is full of men coming up on middle age who find themselves in bizarre circumstances. “Human Butterfly” features a company employee who decides to confront his office naked after being newly fired. In “Re-Union,” a husband and father must deal with a surprise nocturnal visit from some drunken school chums. The male protagonist in the distressing “Ill Conceived” falls pregnant from his wife and gives birth to an alarm clock through his anus. This latter detail gives a clear sense of where Coughlan’s humor lies, and when given the choice between writing from the heart or landing a pun, Coughlan will almost always choose the latter. (One story is called “Interview with a Campfire.”) Puns are not the only quirk of style here. The stories are heavily descriptive and lightly plotted. Sometimes this works, as in the opening story, “A Nuisance,” in which a teenage girl spends long paragraphs trying to kill a fly only to later find herself in a similarly hunted position in the car of an older man. Sometimes it creates stories that seem to be, like Seinfeld, about nothing, as in “Enhanced Forgiveness,” about a man who buys a new golf club and…goes golfing. With an average page count clocking in around 10, Coughlan’s stories, with their antic energy and over-the-top premises, can feel a little like the bumper cars he describes in the final story, “F-unfair,” “with a madman at the controls sending you head-first into a collision that will wipe the smile off the faces of everyone involved.”

When Coughlan eases up on the cleverness and shows his heart, his unique imagination shines through—but unfortunately, this happens too rarely here.