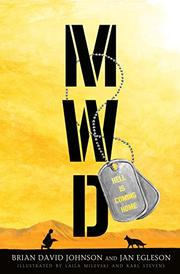 A gritty, hard-hitting, and honest portrayal of one young woman’s difficult journey to putting the pieces of her life back together after serving in the Iraq War.

More a crossover book for adults than one strictly for teens, this black-and-white graphic novel will slap some reality into readers who believe in the glamour of war. Liz, the white protagonist and a former military working dog handler, returns from Iraq after having her leg shattered, sustaining another injury that leaves a scar across most of her torso, and losing Ender, her German shepherd, to an IED. While the half-hearted welcome from the people in her Mayberry-like New Hampshire town makes her feel mildly appreciated, the fallout from PTSD, sexual violence she experienced while in the Army, blackout drunkenness, and an inability to trust anyone for any length of time leads to a downward spiral. Flashbacks accost her often, coming most predictably in vehicles, putting herself and others in danger. Only with the help of Jack, a Vietnam veteran, and Brutus, an aggressive stray dog she rescues from a roadside, does she begin to have hope. The story’s strong language, graphic depiction of war, and Liz’s unpredictable behavior make this an emotionally taxing read, but the ups and downs also effectively give readers a sense of Liz’s trauma.