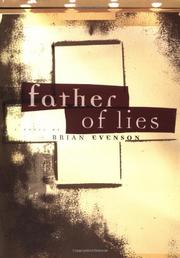 Storywriter Evenson (Altmann’s Tongue, 1994) makes his novel debut with a timely, readable, but debilitatingly stiff exploration of hypocrisy and religious zeal. Imagine a conservative religious group’subscribing explicitly to —family values,— of course’so rigorously zealous that it calls itself the Corporation of the Blood of the Lamb and even accepts the nickname of —Bloodites.— And imagine there being in this group a dedicated, widely respected, unquestionably stolid and upright family man who serves as a —provost,— or kind of priest, thus having great moral and spiritual responsibilities not only to his own wife and four children, but to all the families—and children—of the Bloodite congregation. And then imagine that this stolid, upright, trustworthy man is in reality nutty as a fruitcake, a raging psycho who half-deludes even himself into believing that he isn—t actually a child-rapist and child- murderer who invariably gets away with his ugly crimes by drawing conveniently on own indelible appearance of sanctity and reputation for goodness—after all, his logic goes, he wouldn—t be a provost if he weren—t good, would he? Then imagine dreams beginning to disrupt the sleep of this man—Eldon Fochs’so violently that his wife insists he go for counseling. And imagine that his psychiatrist, bit by bit, begins to uncover the truth—only to find himself then being —told— by authorities of the Corporation to cover it up and desist, since after all, the reputation of the church must be preserved. —It’s a dirty game they play,— thinks the psychiatrist, the most rounded and alluring figure in the book but one who, alas, disappears too soon, leaving us in the company of the vile church superiors and the repugnant Fochs himself, who remains creaky and automaton-like even while being visited—as in, say, Dostoevsky—by vicious doubles representing his own mind. An investigation of the perverse that, however impassioned in aim or zealous in its own message, remains distractingly cartoon-like and thin.