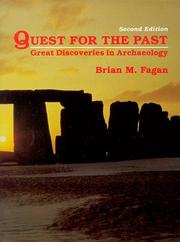 QUEST FOR THE PAST: Great Discoveries in Archaeology

Nine assorted chapters in the ""colorful"" history of archaeology--Leakey at Olduvai, RenÃ‰ Millon at TeotihuacÃ¡n, Richard Daugherty at Ozette (a sleeper), plus Layard, Schliemann, Evans, Carter, and Chairman Mao--that cohere neither as archaeological history nor as the history of ancient civilizations. Compounding the quandary is Fagan himself: as an archaeologist, he's a technician; as a writer, he's clumsy, effusive, a conveyor-belt of clichÃ‰s. But the reader who's not dis-inspired by the introductory paean to meticulousness, accuracy, precision, rigor, and modern technology (by contrast with that wild digger Schliemann), or set on edge by repeated exposure to ""mind-boggling"" and worse (""then Napoleon himself got into the act"") will find two rewards. The first--Northwesterners, take note--is an account of the Makah Indian culture on the Washington coast and its recovery by state university archaeologist Richard Daugherty with Makah Tribal Council aid; the eleventh-hour, waterlogged dig will culminate in a museum on the site, Swedish Vasa-ship fashion. Number two, appropriate to the author of Elusive Treasure (1977), is the relatively lengthy description of TeotihuacÃ¡n and its study, since 1957, by RenÃ‰ Millon--who, once he had mapped the imposing city, set out to compute its population, starting with the number of sleeping places in the apartment buildings. The other sections (Layard et al.) rehash old material that is better presented elsewhere--except for the Chinese chapter which first twits, then follows the Communist line, concentrating on the new finds (exhibited on the recent propaganda tour) and ignoring the fate of old ones. Altogether, a questionable proposition.