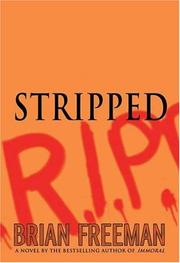 Showgirls and mobsters and madmen—good times. The 40-year-old murder of a Vegas dancer inspires a psychopath’s killing spree in Freeman’s delightfully tawdry page-turner.

Four decades ago, Amira Luz was the queen of Vegas: the hottest dancer in the city’s hottest show, pursued by mobsters, magnates, movie stars and pretty much anyone else lucky enough to catch a glimpse of her. But it all came to an end when she was murdered in her hotel pool. The crime was pinned on an obsessed fan, and that was pretty much that—until now. There’s a serial killer in town, and he’s picking off Sin City denizens one by one. The connection? Amira, of course; each victim is somehow connected to the long-dead beauty. In charge of piecing together the puzzle is Las Vegas detective Jonathan Stride (Immoral, 2005). With the help of transsexual partner Amanda Gillen and cop/lady-friend Serena Dial, Stride sets out to uncover the killer’s identity and end his spree. Of course, it could never be that simple. This is Vegas, a town where everyone has a cache of secrets stashed somewhere, and Stride’s search can’t help but bump up against a few facts local power-players would prefer kept under wraps. The author makes a half-hearted grab at gravitas, giving his leads a set of suitably dark backstories, but ultimately, the story is pure confection. Murder, money, suspense and sex are accounted for as Freeman consistently hits his thriller marks, keeping the action coming and the tension high. The characters are mostly made of cliché, but, happily, they’re entertaining. Stride himself provides a nicely humane counterpoint to the otherwise breathless Vegas shenanigans.

The height of guilty pleasures.