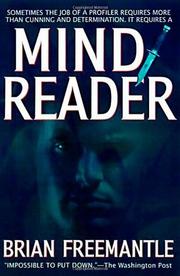 This time out, veteran Freemantle (Bomb Grade, 1997, etc.) gives us more than just a classy thriller. It’s also a biting study of the paranoia inherent in all bureaucracies. True enough, he does take a painfully long time—80 pages or so—in getting started. Once the stage has been set, though, the rewards pile up: a quickened narrative pace, vivid characterizations, and a romance fresher than most thrillers usually deliver. Claudine Carter (French mother, English father) is a profiler. Well, not just any profiler, she’s Britain’s best, posted to The Hague to be part of Europol. It’s a pivotal moment in that infant organization’s history. Struggling to become the European Union’s FBI, it’s in desperate need of a score in order to be taken seriously—and at exactly the right time, a big case looms. Dismembered bodies are being discovered in major cities across 15 nations, and it’s clear that this grisliness is meant to convey some kind of awful message. How to interpret it? And is it the work of a serial killer—or a clutch of them? For Europol, the opportunity is obvious, but Claudine, the lynchpin of the ad hoc team assigned to the case, is surrounded by dedicated careerists. Which is to say, by accomplished back-stabbers, skilled manipulators, and all manner of bureaucratic rabbits. A problem-solver like Claudine, selfless and honest, threatens and terrifies them: they’d rather fail than see her succeed. But Claudine finds people to help her—and a man to love—in unexpected places. And from within herself, for the sake of the greater good, she summons up the will and the wiles to deal with her enemies, ploy for ploy. Sharply observed and, except for the molasses-like start, deftly told. Hard-shelled but soft at the core, Claudine makes things all the better.