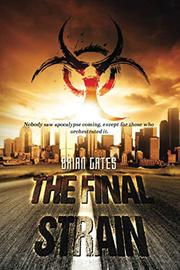 Two brothers must deal with a deadly virus and a kidnapping in this apocalyptic conspiracy thriller.

Siblings Brian and Nick McGuiness are among a lucky few, armed and supplied for a doomsday scenario and miraculously immune to the D.C. Virus, a hemorrhagic pathogen killing the country’s citizens at a blistering pace. What they’re not prepared for is the kidnapping of their sister, Amelia, or the more sinister plot that crime portends. The story unfurls from a variety of immune perspectives, ranging from a nuclear family to the members of a rehab group to the kidnappers and the shadowy cabal behind them. While the point-of-view characters don’t have particularly distinct voices, the switches in perspective still allow the tale to swiftly proceed even as the various families and groups meet and work together. But that togetherness is a blessing and a curse. On the one hand, as civilization rapidly descends into lawlessness, there’s safety in numbers. On the other hand, it’s difficult to know who to trust, and rumors of a cure and a safe haven and the ever present mysteries of where Amelia is and what’s so important about her threaten betrayal at every juncture. And when it finally turns out that the virus was released deliberately by the rich and powerful, it’s clear the story is just beginning. Gates’ (One Shot, 2017) prose is a mixed bag, and feels awkward or messy at times: “Three of the four lumberjacks lied on the floor, writhing in agony. Only Grizzly remained standing, and Brian and Nick turned to face him. All of the confidence had departed his eyes and the color had drained from his face.” Nevertheless, fans of the genre will likely be able to look past this flaw and enjoy the plentiful action and breakneck pace, both of which make for an entertaining read. The novel doesn’t do anything new with its concepts, but life-and-death struggles, chaos, and disparate characters thrown together always make for superb storytelling. The tale is no diamond in the rough but sometimes rough is just what readers are looking for.

An energetic and engaging action-adventure.