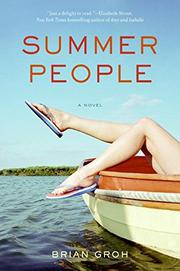 An eye-opening summer in what resembles, at first, “the America of Norman Rockwell’s sweetest dreams.”

Groh’s perceptive debut touches some darker notes than its bland title suggests. When aspiring graphic-novelist Nathan Empson—forced by his father to accept a summer job tending to elderly, confused and wealthy Ellen Broderick—arrives at Brightonfield Cove, an upscale Maine resort, he feels as if he has entered a scene from a Lands’ End catalogue. But two months of presumably nothing to do turn into a strenuous life lesson as Nathan realizes his task of minding Ellen requires more involvement and responsibility than he had been led to believe. Her complicated past in this small, gossipy community includes ex-lovers, a bitter estranged wife and a suicide attempt. Thrust among the players in local dramas, Nathan finds himself compromised, misunderstood and sucked into various unpleasant situations, including a house fire and a fistfight. His idyllic summer romance with Leah, employed as a nanny for the local pastor—a man with a drinking problem and a depressed wife—also presents layers of complexity below its romantic surface. Groh’s dry social observation, his wicked ear for dialogue and flashes of ironic humor transmute a fluffy scenario into something more philosophical, as Nathan moves through a tragicomic landscape, coming to grips with class, money, Aristotelian precepts, mortality, the essential loneliness of the human condition and the possibility that the pursuit of happiness might not be all that it’s cracked up to be.

A modest, beguiling tale full of wit and wisdom.