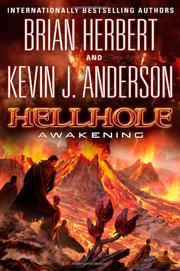 From the Hellhole series, volume 2

Part two of the interstellar war/alien contact series that kicked off with Hellhole (2011).

Constellation ruler Diadem Michella Duchenet, terrified at the possibility of contamination by the alien Xayans with whom the rebellious colonists of the Deep Zone have formed a partnership, sends a huge battle fleet to annihilate them. Travel between star systems is accomplished via stringline, a sort of interstellar zip line, so Gen. Tiber Adolphus, the rebel leader on planet Hallholme, devises a plan to cut the stringline and isolate the loyalist fleet. Furious when her fleet fails to report back, Michella orders a surprise attack via a different route and readies a second battle fleet under the son of Adolphus’ old nemesis, Commodore Percival Hallholme. Back on Hallholme, meanwhile, the humans who have accepted Xayan personalities, the shadow-Xayans, are developing their powers of telemancy, a sort of remote telekinesis, to defend themselves. The Xayans’ ultimate goal is to achieve racial transcendence. However, there’s something important they aren’t telling their human partners. At the heart of the Constellation on planet Sonjeera, Ishop Heer, Michella’s spy chief and hatchet man, pursues his private agenda of restoring his family to the nobility, unjustly—as he sees it—ejected 700 years ago. Still, other factions within the aristocracy feel it would be better to reach an accommodation with the rebels. Unfortunately, the plotting owes more to convenience than verisimilitude. No matter who contributes the ideas, and there’s nothing here of arresting originality, the style is pure Anderson boilerplate, and it’s becoming harder and harder to recall the days when Herbert solo wrote such accomplished and amusing yarns as Sudanna, Sudanna.

A routine entry in a mediocre series, strictly for fans already hooked with volume one.