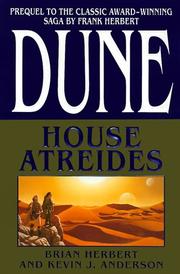 Since Frank Herbert, author of the mighty Dune series (ending with Chapterhouse: Dune, 1985) died in 1986, rumors have been circulating that his son Brian (Sudanna, Sudanna, 1985) would continue the saga. Finally, in collaboration with Anderson (Star Wars novels, X-files novels, thrillers, etc.) he has: the action of this prequel occurs several decades before that of Dune, the series opener. In a far-future galactic empire, everything from commerce and politics to interstellar travel and longevity depends on a miraculous spice, mÇlange, whose sole source is the desert planet Arrakis. The Emperor, Elrood IX of House Corrino, sends scientist Pardot Kynes to Arrakis to study its puzzling ecology. Elrood’s son Shaddam, meanwhile, plots with the assassin Hasimir Fenring to murder his father, while simultaneously prodding the old emperor to conspire with the despised, genetic-whiz Tleilaxu to develop an artificial source of the spice. A young, lean Baron Harkonnen oversees Arrakis and spice production, while his deadly rival, Paulus Atreides, sends his son, 14-year-old Leto, to planet Ix to study its sophisticated machines. The manipulative Reverend Mothers of the Bene Gesserit sisterhood require both Harkonnen and Atreides genes to achieve their long-standing objective of breeding an omniscient psychic that they can control while remaining dependent on a poisonous spice-liquor to ignite ancestral memories. Undeniably, the authors have accepted a formidable challenge. So how does their effort stack up against Frank Herbert’s originals? Well, the plotting’s as devious and complicated if less subtle, and it’s comparable in scope, with gratifying inventive touches. Still, the disappointingly lightweight characters make for less powerful drama. In a word, satisfying: all Dune fans will want to investigate, newcomers will be tempted, and it should promote fresh interest in the magnificent original series. (Author tour)