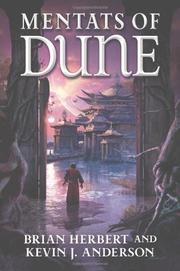 Another prequel (Sisterhood of Dune, 2012, etc.) piecing together the developments by which the Bene Gesserit Reverend Mothers, human-computer Mentats, legendary-warrior Swordmasters and interstellar navigators of the Spacing Guild created the universe of the original Dune.

Weak-minded, foolish Salvador of House Corrino relies on his more talented brother, Roderick, to help rule the Empire, little suspecting how powerless he really is. Dying Mother Superior Raquella labors to rebuild the Sisterhood School; her dearest wish is to heal the breach with the estranged Sisters who, led by Reverend Mother Dorotea, profess loyalty to House Corrino and to the Butlerian movement. However, Raquella’s probable successor, Valya Harkonnen, has placed personal concerns above the goals of the Sisterhood. Gilbertus Albans, head of the Mentat School, teaches his students to use their minds as efficiently as those of thinking machines. But Gilbertus (secretly, he keeps the brain of the evil thinking robot Erasmus in his office) has, perhaps fatally, compromised with the Butlerians. Led by the legless fanatic Manford Torondo and his Swordmaster Anari Idaho, the Butlerians have extended a not-unreasonable proscription on thinking machines into an unreasoning hatred of all technology, despite their own reliance upon it. Josef Venport, meanwhile, whose space transport fleet depends upon spice from Arrakis to produce foldspace Navigators, defies the loathed Butlerians by ruthlessly embargoing any planet that accepts Manford’s anti-technology pledge. Series fans know what to expect: adroit plotting, flat narration and intriguing if not quite fully believable characters (inevitably, the developing schools of thought assume greater importance than the individuals) maneuvering against a backdrop shaping itself into the vast, complex, fascinating Dune universe.

The magic lingers, even when the final chapters have already been written.