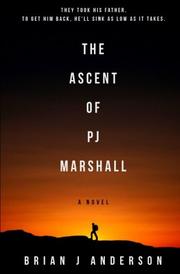 The Ascent of PJ Marshall

In this debut novel, a devoted son sets out to discover his father’s whereabouts after he suddenly, inexplicably disappears.

An accident left Butch Marshall, a former scientist, leaning on crutches. Though he has no recollection of what happened, he suspects that it was no accident. So when the sheriff’s department contacts his son to inform him that Butch is missing, Paul James (PJ, as his father affectionately nicknamed him) decides to go in search of his dad, especially since the police, who suspect Butch of theft and extortion, have a warrant to search Butch’s house. By the time readers glean that plot development, a third of the narrative has passed; that’s because the chapters alternate between past and present—12 years ago, six years ago, five, then six again—making it feel as if the relevant, present-day details are being doled out with an eyedropper. For most of the book, the chapters also switch back and forth among different third-person perspectives, alternately focusing either on the good or the bad guys. The latter are numerous, but their motivations and relationships to one another aren’t revealed until late in the story. The staccato narrative also means that it’s rarely clear whether the action is taking place in Wisconsin, Wyoming or Washington state. Most of the chapters dealing with the past center on father-son bonding trips (camping, fishing, mountain climbing), which are the best, most realistic and detailed parts of the book, even if they do little to advance the plot.

A sometimes clunky, often confusing and slow-paced thriller that fails to deliver the chills.