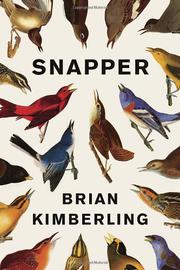 A sad-sack ornithologist navigates the wilds of southern Indiana and its quirky denizens.

Kimberling’s debut is a collection of linked stories narrated by Nathan Lochmueller, a smart but mostly luckless man who stumbles into a job monitoring bird patterns. The pay is awful, and Nathan is conflicted about how his unfaithful girlfriend, Lola, helped him get the gig. But at least the job introduces him to a colorful, if occasionally scarifying, array of characters: He meets diner patrons who reply to kids’ letters to Santa Claus, would-be mushroom-hunters, ersatz Klansmen and dimwitted bureaucrats who legislate on the environment without knowing the first thing about it. As Nathan notes, southern Indiana is an odd mix of levelheaded Midwest culture and oddball Southern folkways, and Kimberling’s prose nicely evokes this culture clash: His unusual scenarios are rendered with a wry, self-deprecating wit. Violence abounds on Nathan’s turf—a snapping turtle takes off a friend’s thumb (hence the title), a drunk friend takes a two-by-four to a few parking meters, a stoner pal is stabbed, and Nathan himself gets pushed down a flight of stairs—but more as evidence of life’s absurdity than of its tragedy. Kimberling’s stories have depth, but he never forces a message on them; a chapter in which Nathan comes across a human bone in a graveyard is handled with easy humor instead of ponderous metaphor. This book has enough of a story arc that the fact that it’s not a full-fledged novel is somewhat frustrating: We learn about Lola’s romantic wanderings but not enough to suggest their full impact on Nathan, and while Nathan’s emotional evolution in the closing story is a pleasant surprise, it's a jarring one—a more intricately structured tale could give his character more resonance.

A well-turned debut that airdrops its characters into an appealingly offbeat milieu.