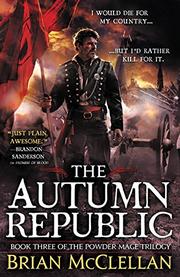 From the Powder Mage series, volume 3

Final part of the Powder Mage trilogy (The Crimson Campaign, 2014, etc.) about—well, mix the American Revolution with the Civil War, stir in gods, magic, power politics and what-all, and you’ll get the flavor.

Adro is being invaded by overwhelming forces—armies, gods, dark magic—from Kez. Again, the narrative focuses on three key figures. Field Marshal Tamas, a powder mage, one who eats or snorts gunpowder in order to gain magic powers, having been trapped behind enemy lines and facing annihilation, returns to the capital, Adopest, only to find it occupied by yet another invading army. His new allies, the Deliv, won’t arrive for weeks, and in the meantime, his beleaguered, fractious army faces not only the innumerable Kez armies, but internal dissent and outright treachery. Among other problems, the traitors are pursuing Tamas’ son, Taniel Two-shot, a powder mage and master marksman, who finds his own powers growing even without the boost offered by gunpowder, and Taniel’s companion, the mute, barbarian female witch Ka-poel, who, by means of her incomprehensible magic, has confined the terrifying god Kresimir. And Tamas charges retired police inspector Adamat, who’s wrestling with his own personal tragedy, with investigating the situation in Adopest. It’s complicated by the fact that, at the beginning, none of the three knows whether any of the others are still alive. So, fully realized characters contend with a stunning tangle of plots, counterplots, perfidies and conundrums against a highly textured backdrop. The action sequences that intersperse all this are as ferocious as ever, and it’s so inventive that it sometimes seems as though McClellan’s doing it just because he can.

A slam-bang conclusion to an outstanding trilogy.