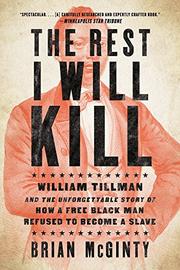 THE REST I WILL KILL

Attorney and historian McGinty (Lincoln’s Greatest Case: The River, the Bridge, and the Making of America, 2015, etc.) has uncovered another compelling, little-known gem of American history, though it’s not as bloodthirsty as the title would suggest. William Tillman, an illiterate, 27-year-old, free black man from Rhode Island, worked as a ship’s cook and steward. On July 4, 1861, Tillman and a small crew left New York Harbor on the S.J. Waring, a schooner bound for Uruguay. The Civil War had just broken out, and Abraham Lincoln ordered a blockade of the Southern coast. Less than a week into the voyage, they were stopped and boarded by the crew of the Jefferson Davis, a Confederate privateer. They claimed the ship, cargo, and crew as Yankee prizes of war. Tillman would fetch a substantial amount of money when sold into slavery in Charleston. The crew kept him and two others onboard to help sail the Waring. At night, when most were sleeping, Tillman used a hatchet he kept hidden to kill the Confederate captain and two others. The rest were put in irons. As Tillman later told an official inquiry, “I will get all I can back alive, and the rest I will kill.” They now began the dangerous journey home. Captain-less, Tillman’s experience and knowledge helped them navigate coastal waters and elude other privateers. After five harrowing days at sea, they sailed into New York Harbor, 17 days after they had left. Tillman, writes the author, received a “hero’s welcome.” His story was covered by Northern and Southern publications, and after the inquiry, he was awarded salvage money. Tillman then “slipped out of the public eye and was soon forgotten.” McGinty impressively recounts this extraordinary story of a remarkable man, the “first real hero of the conflict.”

Race, patriotism, and personal heroism come together in this eye-opening early episode in Civil War history.