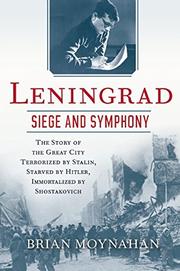 The Story of the Great City Terrorized by Stalin, Starved by Hitler, Immortalized by Shostakovich

A history of the Nazis’ death grip on Leningrad artist Dmitri Shostakovich and others.

Before the Germans encircled the city and cut it off from the “mainland” in September 1941, Leningrad had already endured Stalin’s horrific reign of terror and repression during the 1930s. British journalist Moynahan (The French Century: An Illustrated History of Modern France, 2012, etc.) approaches this work with great energy and a solid historical background, sifting through the victims of the NKVD’s brutality with such care and detail that the narrative is sometimes difficult to digest. As one of the city’s most illustrious residents, pianist and composer Shostakovich (1906-1975) had enjoyed tremendous success from his early 20s writing ballets, operas, films and symphonies until 1936, when his work ran afoul of Stalin and was officially denounced in the Leningrad paper as “bourgeois” and “formalist”—i.e., Western-influenced, modernist and lacking the appropriate social realism. Henceforth, the composer was on tenterhooks, as so many fellow artists around him were denounced, imprisoned, tortured and shot. Yet Shostakovich’s work was world-famous, and Stalin recognized his propaganda appeal. With the Nazi tentacles encircling Leningrad, the composer began his Seventh Symphony in patriotic response: “I wanted to create the image of our embattled country, to engrave it in music.” Before he could finish it, however, he was ordered to leave Leningrad with his wife and children; they were airlifted to Moscow and then Kuibyshev, where they enjoyed a comfortable stay for the duration of the war, while his compatriots were starved and weakened by disease and freezing cold. The Seventh debuted to great fanfare in Moscow, London and America, and it eventually found its way back to Leningrad, orchestrated by 100-plus musicians fainting from hunger but resolute for its first hometown performance.

An intense, incredible story of Russian fortitude and misery.