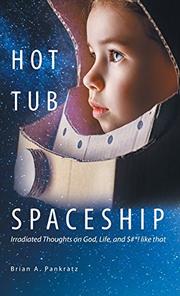 by Brian A. Pankratz

In a series of meditative essays, a former preacher with brain cancer ponders death, love, and God.

Debut author Pankratz spent about a quarter-century as a missionary and pastor in the Evangelical tradition, but he eventually left it, disenchanted with what he saw as its hypocrisy, doctrinal dogmatism, and lack of inclusiveness. Moreover, he says, he was disillusioned by what he felt was a kind of scriptural idolatry—a blind devotion to the Bible that, in his view, placed it above spirituality and even God. The author experimented with a more liberal church, but although he was impressed by its message of tolerance, he was disappointed by the banality of its message. Pankratz’s post-ministry days have been professionally diverse: He’s sold cars, worked at a cafe and a liquor store, and tended bar. Here, he gathers his reflections into a series of self-sufficient essays that are more impressionistic than chronological; thus, they can be fully understood and enjoyed in any order. The author discusses a broad spectrum of personal and intellectual issues, including his ongoing battle with a cancerous brain tumor and his life as a husband and father. There are also lots of quotidian exploits and quirkily comic anecdotes about his friends—one of them apparently trained with a bona fide ninja. Still, the thematic fulcrum of his ruminations is his spiritual life—in particular, what it means to be a Christian outside the confines of institutional support and without the consolations of certainty. Pankratz writes with clarity and charm, and the personal intensity with which he interrogates serious issues is tempered by a breezy, informal style. His message is an uplifting one: “It…takes courage to face our feelings of loss, doubt, and emptiness. But once we begin sharing them, they often dissipate….We get served a pint of hope.…God is the ultimate bartender. And he never cuts us off.” The author’s background as a pastor does sometimes creep into his prose, as he has a tendency to sermonize. Overall, though, this is a thoughtful and engaging assemblage of reflections.

A philosophically inquisitive discussion of what it means to be a Christian.